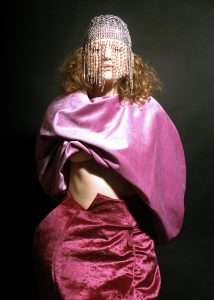 1. How much influence does your belonging to different cultures have in your production? Does the Italian or Mexican influence emerge more?

I grew up actually with three different cultures (american, italian, mexican) and it really gave me so many points of inspirations that created in me a sort of chameleon personality that I express through different identities (In my new collection I’m really pushing this concept as I want to give different options to my customers to be whoever they feel like). I love to mix italian sartorial eleganza, with that 80’s punk vibe that I grew up with while I was living in LA with my dad, and the more eclectic colorful quinceanera Mexican influence. They all emerge equally I guess.

2. In which parts of the creative process does your Italianness emerge and in which Mexico?

As I said before I guess they emerge equally. I think my italiannes comes when I get to the tailoring/sartorial side of my job, in which I like to use
simple and minimal cuts, and that idea of ‘diva’ from 60’s italian movies. The latino side it’s in the colors and prints; my grandma has this amazing
house with a lot of embroideries made by her of Frida Kahlo, la Virgen de Guadalupe and of course Elvis and I guess it really influenced me as I was
growing up.

3. Do you have artists, Italian, Mexican or of other nationalities that you look at in a particular way as a source of inspiration?

I constantly change depending on my moods; as I mentioned before I get influenced by everything and I don’t follow any specific wave. For my
collection at the moment I’m looking at Indian artists from the 20/30s such as Amrita She Gil or Tyeb Mehta. (Beside the shoe store where I’m currently
working lives an Indian family; I got so intrigued by their colorful outfits that I interviewed them and I got to know so much about the Indian
culture that I needed to integrate it in my collection. In general I would say that Luigi Ontani is my favorite artist, in terms of shapes, colors, the
myth, symbolism, it’s something that really fascinates me. Of course Frida Kahlo which it’s probably a cliché, but she’s part of my culture and also
her constant interaction with her inner soul it’s something that profoundly inspired me. Felice Casorati, Jana Euler, John Baldessari as well.

4. How has growing up in your grandparents’ pottery factory influenced you? Which elements of ceramic processing are
most part of your brand?

It was fun, mostly because I had the chance to actually mold and create and color, so it really opened my mind towards a more artisanal point of
view. The idea of starting from a simple block of clay and shaping it, according to the material, the feeling etc really influenced me. For my garments
I always start from a basic oversize block and then using hidden elastics or trims inside you can shape it directly into your body. I find it interesting
because the customer is the one who will decide which form the garment can take, adapting it on his own body. I love to give freedom to
change, be whoever you want. It’s something fundamental for me.

Login to Event Savó
Reset Password
Enter the username or e-mail you used in your profile. A password reset link will be sent to you by email.
We use cookies on our website to give you the most relevant experience by remembering your preferences and repeat visits. By clicking “Accept”, you consent to the use of ALL the cookies.
Cookie settingsACCEPT
Manage consent

This website uses cookies to improve your experience while you navigate through the website. Out of these, the cookies that are categorized as necessary are stored on your browser as they are essential for the working of basic functionalities of the website. We also use third-party cookies that help us analyze and understand how you use this website. These cookies will be stored in your browser only with your consent. You also have the option to opt-out of these cookies. But opting out of some of these cookies may affect your browsing experience.
Necessary Always Enabled

Any cookies that may not be particularly necessary for the website to function and is used specifically to collect user personal data via analytics, ads, other embedded contents are termed as non-necessary cookies. It is mandatory to procure user consent prior to running these cookies on your website.